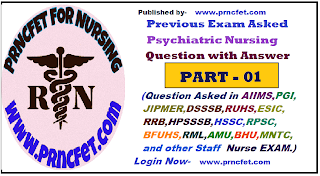 Q.1 A Five year old patient diagnosed as rectal cancer and his response to the diagnosis is that “Nothing is wrong it is just hemorrhoids “ which defensive mechanism he used ;-
(A) Denial
(B) Repression
(C) Projection
(D)Displacement


Q.2 Preoccupation with a fear of having a serious physical illness, not based on real or organic pathology is ;--
(A) Hyertonicity
(B) Hypoesthesia
(C) Hypochodriasis
(D) Psychosomatic disorder


Q.3 Delusion is a disorder of ;-
(A) Undoing
(B) Repression
(C) Denial
(D) Derailment
www.prncfet.com

Q.5 Catatonic Behavior in Schizophrenia is characterized by which of the following:-
(A) Resisting attempts to be moved
(B) Maintaining rigid, immobile postures
(C) Decrease in reactivity to the environment
(D) All of the above


Q.6 With Barbiturate and Benzodiazepine abuse and dependency, sedative intoxication is generally associated with:-
(A) Uncoordinated motor movement
(B) Slurred speech
(C) Impairment in attention and speech
(D) All of the above www.prncfet.com


Q.7 Which of the following are risk factors for childhood Psychiatric Disorders?
(A) Harsh or inadequate parents
(B) Parental Psychopathology
(C) Repeated early separation from parents
(D) All of the above

Q.9 A Patient who decides to leave that hospital against medical advice(LAMA) Must sign a form. what is the purpose of this form?
(A) To use in the event of readmission
(B) To release the physician and hospital from legal responsibility for the patient health status (C) To indicate the patient’s wishes
(D) To ethically illustrate that the patient has control of his or her own care and treatment.

Q.11 Abnormal Sensitivity to light is known is :-
(A) Photophobia
(B) Hydrophobia
(C) Aphasia
(D) Diplopia


Q.14 When a client makes up stories to fill in the blank space or memory it is known as :-
(A) Rationalizing
(B) Confabulating
(C) Lying
(D) Denying


Q.15 The part of the mind that distinguishes right from wrong and acts as a censor or behavior is called :-
(A) Id
(B) Ego
(C) Super Ego
(D) Libido www.prncfet.com


Q.16 The most common type of dementia is :-
(A) Alzheimer’s disease
(B) Pick’s disease
(C) Parkinson’s disease
(D) Tics disease


Q.17 Perception of any object in the absence of actual stimulus is termed as :-
(A) Delusion
(B) Hallucination
(C) Dementia
(D) Illusion
www.prncfet.com

Q.19 In following which is a thought disorder :-
(A) Compulsion
(B) Mannerism
(C) Automatism
(D) Delusion


Q.20 A mental disorder in which a person feels that lice are crawling on his arm, But actually there are no lice on his skin, the person is suffering from :-
(A) Auditory illusion
(B) Tactile illusion
(C) Auditory hallucination
(D) Tactile hallucination

Q.21 What is a sociological definition of the word Drug ?
(A) A chemical
(B) A substance that changes mood, behavior or consciousness
(C) A dysfunction
(D) Ecology


Q.23 Which one of these is used in bed wetting in children?
(A) Levodopa
(B) Chlorpromazine
(C) Imipramine
(D) Tacrine


Q.24 During the initial care of rape victims the following are to be considered by a nurse Except :-
(A) Accompany the client in examination room
(B) Touch the client to show acceptance and empathy
(C) Assure privacy
(D) Maintain a non-judgmental approach


Q.25 The first drug of choice for a patient admitted with status epilepticus is ;-
(A) Diazepam
(B) Phenytoin
(C) Sodium valproate
(D) Carbamezepine

Q.26 A 55 year old man was admitted after a motor vehicle accident with multiple injuries .His friend reported that he had been seeing a psychiatrist for an unknown diagnosis .He stated that the patient sometimes gets “Hyper “ for no reason , and becomes violent and sometimes is depressed . Of the following, which general psychiatric disorder is characterized by a pattern of aggression or violence which includes irritability, agitation, and violent behavior during manic or psychotic episodes?
(A) Delusional disorder
(B) Schizophrenia
(C) Bipolar disorder
(D) Depression
www.prncfet.com


Q.28 Emotion can be expressed by which of the following ;-
(A) Language
(B) Facial Expression
(C) Gesture
(D) All of the above

Q.30 A patient keeps repeating the last few words of what he heard the condition is known as ;-
(A) Thought
(B) Echopraxia
(C) Echolalia
(D) Neologism


Q.36 Thinking is mental process that deals with :-
(A) Thought and Ideas
(B) Motives and Movement
(C) Feeling and Emotion
(D) Action and Reaction
www.prncfet.com


Q.38 When A person Retreat or Revert to an infantile or childish level of Behaviour is called?
(A) Regression
(B) Suppression
(C) Repression
(D) Sublimation


Q.39 Which is the example of antianxiety drug?
(A) Diazepam
(B) Promazine
(C) Lethium carbonate
(D) Perinorm


Q.40 The patient with Antisocial Personality :-
(A) Rapidly learns by experience and punishment
(B) Has a great sense of responsibility towards others
(C) Is generally unable to postpone gratification
(D) Suffers from a great deal of anxiety
www.prncfet.com

Q.41 The emotional experience in childhood becomes traumatic when?
(A) The ego is overwhlmeed by anxiety it cannot be handled
(B) The child is unable to verbalized own feeling
(C) Parents are harse and restrictive
(D) The superego has not been internalized


Q. 42 Mentally Healthy individual can be defined as those who?
(A) Are able to meet their own basic needs
(B) Are not exhibiting pathological symptoms
(C) Are free from both physical and emotional problems
(D) Have insight into their own problem
www.prncfet.com


Q.44 In following which therapy is used for treating Phobia ;-
(A) Hypnosis
(B) Aversion therapy
(C) ECT
(D) Systematic Desensitization


Q.46 In following which is the major indication of ECT ?
(A) Servere Mania
(B) Phobia
(C) Servere Depression with suicidal
(D) Hysteria


Q. 47 In following which is not an example of opioid ?
(A) Morphine
(B) Pethidine
(C) Naloxone
(D) Heroin
www.prncfet.com